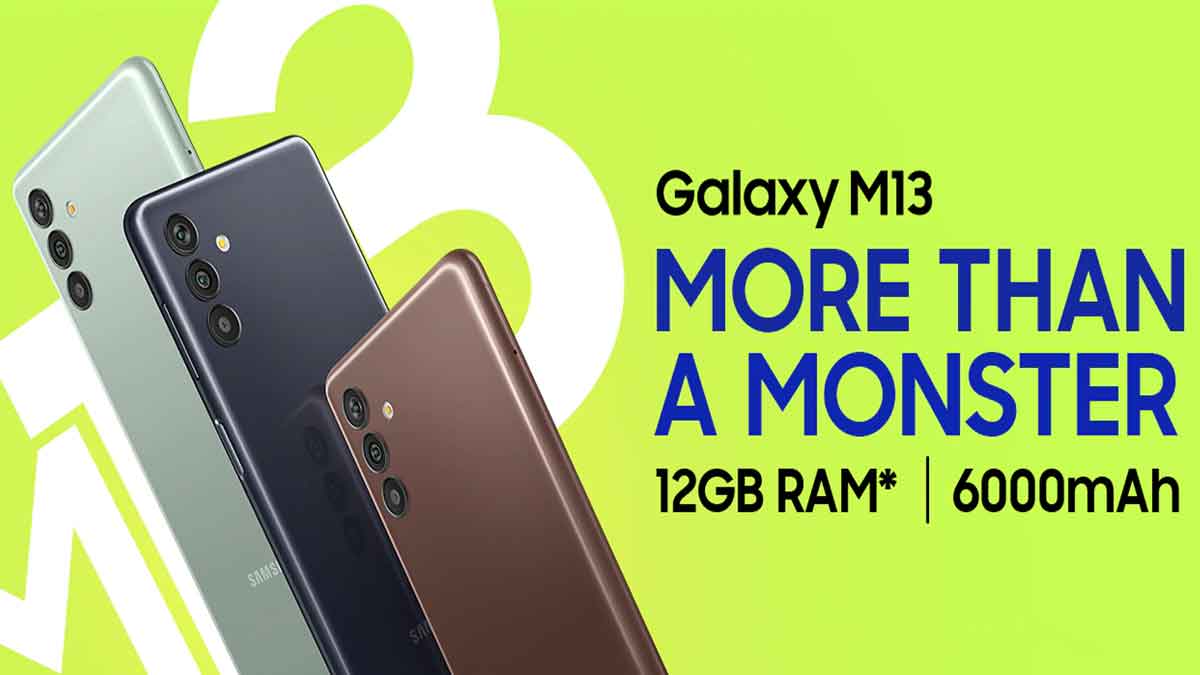 Its price range is attracting the mid range buyers and you can also do multitasking with this smartphone as it Samsung Exynos 850 processor based on 8nm technology. It also comes in two storage variants 4GB+64GB and 6GB+128GB.

6GB RAM is good enough for normal day to day multitasking but if are a heavy user then you can also take advantage of RAM Plus feature in this Galaxy phone to increase the RAM.

You can also play BGMI or Pro level games in its 6GB RAM variant without any issues. It also offer a 6000mAh battery with long lasting backup. You can also extend its RAM up to 12GB in this smartphone from settings.

Samsung M13 has been officially launched on 14 Jul 2022. You can now buy Samsung Galaxy M13 from online store like Amazon and Flipkart. It is also available on Samsung official website.

Samsung Galaxy M13 4G is powered with Samsung own Exynos 850 processor. This processor includes worlds advanced 4G technology. It is based on 8nm process technology.

Some of the technical specification of Samsung Exynos 850 processor in Galaxy M13 are as follows:

Samsung Galaxy M13 is available in three different color variants which are as follows:

Samsung M13 is powered with ONE UI 4.1 customized UI by Samsung. One UI 4.1 is also the customized version of Android 12 by Google. Samsung ONE UI 4.1 is available for many Samsung smartphone models which can also be FIND HERE.

Android 12 is the previous version of Android for smartphones by Google. Some of the glimpse of Samsung ONE UI 4 are shown in the picture given below. Samsung smartphones are about to get Android 13 by Google very soon this year.

New smartphones are coming with brand new features based on the latest technology. Smartphones have become the internet surfing machine as well.

Smartphones have made our life very easy. We can do many things in a little time without going from one place to another.

The main highlight of this smartphone is its display and design. And it is also equipped with latest processor based on worlds advanced technology.