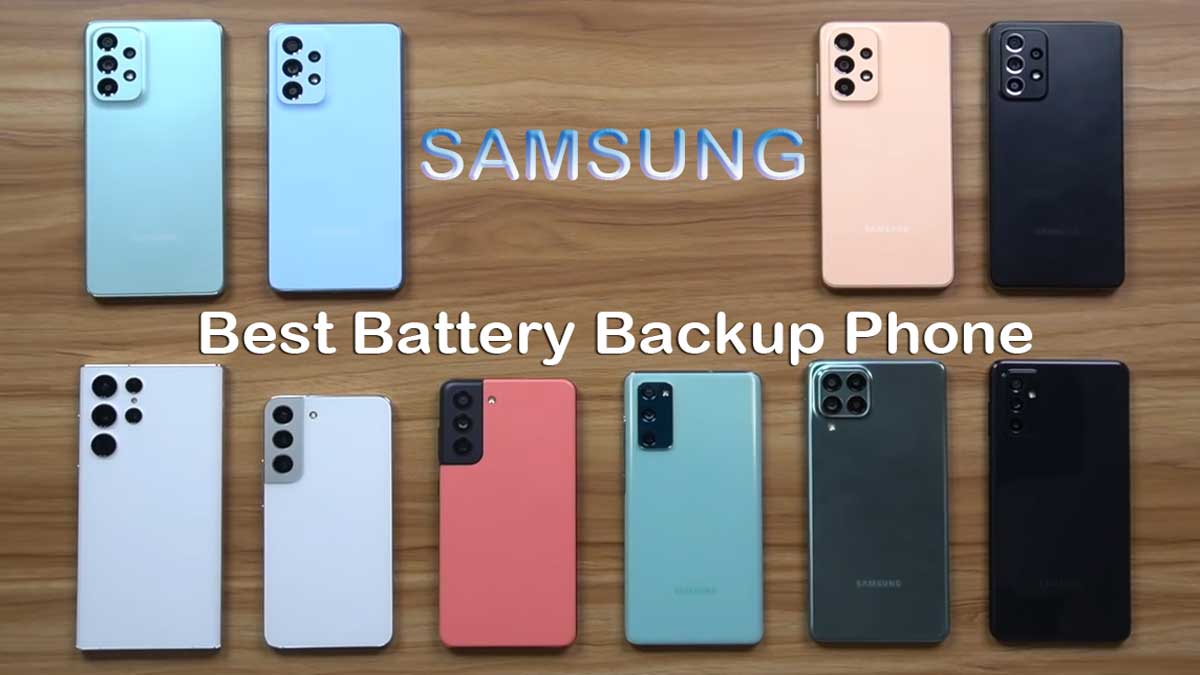 Battery is a very important part of smartphones. Phones are nothing without batteries or in other words we can say that batteries are the vital breath in smartphones.

Many times when we go outside home for full day or more than one day then we are always worried about battery backup of the phone.

So in this post we have compared 16 latest smartphones and picked up the best battery backup phone from Samsung brand.

All Samsung Galaxy models are charged to 100% and used all of them till battery drained to 0% and galaxy phones switched off automatically.

We have picked most selling Galaxy phones worldwide and compared them to choose the best battery backup phone. We have tested Samsung Galaxy Ultra, S22, S21FE, S20FE, A73, A53, A33, A52s, M53 and M52 for battery backup smartphone.

Let’s begin the massive battery test among 10 Samsung Galaxy phones in 2022. All 10 Galaxy devices are placed on the table in an organized manner as shown in the picture below.

Massive battery test among 10 most selling smartphones has begun with location on, maximum brightness, wifi connected, Bluetooth off and without inserting SIM card in any phone.

Battery percentage after 1 hours of playing YouTube with connected same wifi in all devices and the brightness is set to maximum as shown in picture given below.

Battery percentage remaining after 2 hours of usage in all Galaxy devices is shown in the picture given below.

We can clearly see that M53 and M52 are performing very good and battery is drawing slowly than others. And battery is draining faster in S series phones as compare to other series Galaxy phones.

Battery statistics after 3 hours of similar usage is shown in the picture given below. And here testing the graphics in PUBG mobile in all the devices.

Samsung Galaxy phone battery remaining after 4 hours of usage is shown in the picture given below. Till now M52 is performing very good and S22 & S22 Ultra are performing worst in terms of battery backup.

Now front camera Video recording is ON in all remaining Galaxy phones. 03 More phones leave the battery backup race after 06 hours and 12 minutes of total screen on time.

Samsung Galaxy A53, A33 and M52 phone also left the race at 08 hours and 04 minutes of total usage. But M53 is still on and it has become the clear winner of this Samsung Galaxy phones battery backup race.

Samsung M53 also switched off at 08 hours and 11 minutes of total usage. But it is the clear winner in terms of battery backup among the best selling Samsung Galaxy phones in 2022.

In our Samsung phones battery test, we have found that Samsung M53 is the best battery backup phone in 2022 below 5000mAh battery range phones.

Samsung M52 and M53 phones has shown the almost same battery backup time but M53 is the winner in terms of battery performance. But overall M52 is still batter than M53 in all aspects so we recommend you to consider M52 in place of M53.

Note: The battery backup time shown in the table above is found in our test. It could be different in your test as battery backup depends on usage and many other factors.

But all these 10 smartphones are tested in same usage conditions so you can get an idea for best battery backup Samsung phone.

In this test we have found Galaxy M53 is the best battery life phone from Samsung. Although Samsung has also launched its Galaxy smartphone with 6000mAh and 7000mAh battery capacity. Galaxy M51 and F62 come with 7000mAh massive battery capacity.

We have chosen some Samsung Galaxy smartphone launched in 2022 with big battery capacity and arrange them in the form of table for your reference.

You can also find charging speed along with battery capacity of the selected Samsung Galaxy models.

These smartphones are budget smartphones with high end specifications and features. If you want to buy a Galaxy phone with highest battery capacity then these four Samsung models could be your choice.