Skip to content
Home » Comparison » Samsung One UI 5.0 VS One UI 4.1 comparison and review 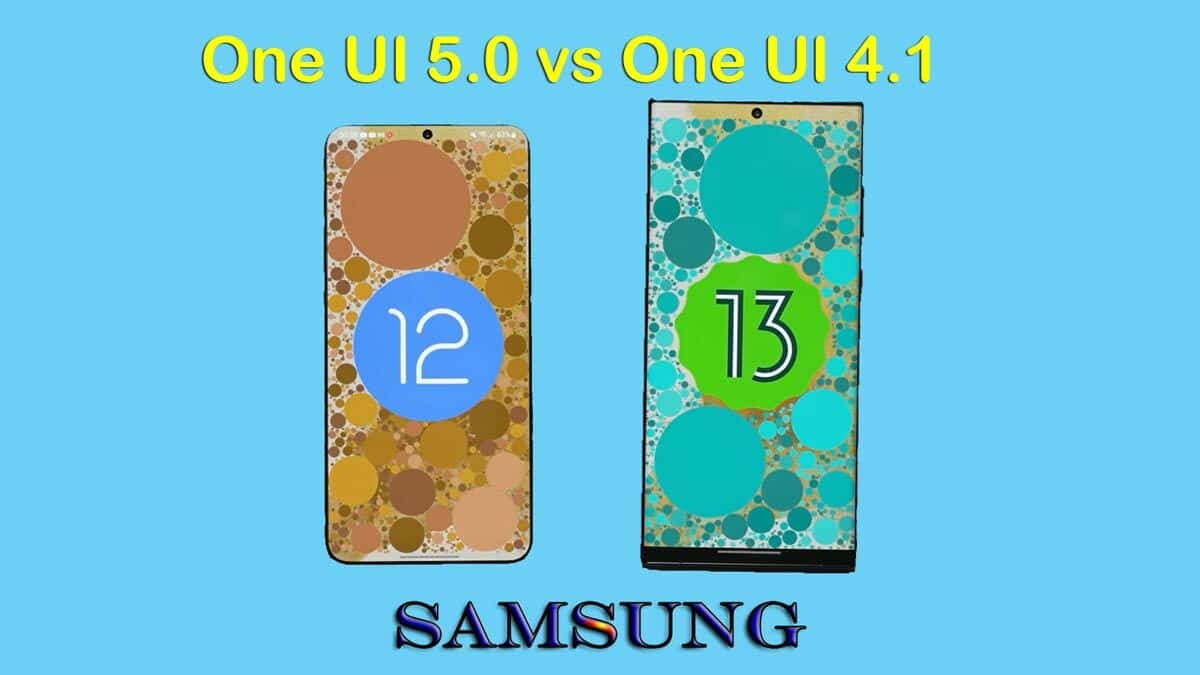 Samsung has released One UI 5.0 beta version for its Galaxy S22 series on 05 Aug 2022. One UI 5.0 is the upgraded version of its previously launched One UI 4.

One UI 5.0 stable version is expected to be launched in October this year. One UI 5 is the customized version of Android 13 by Google.

One UI 5 update has bring many new features and customization options to Samsung Galaxy devices.

Till August 2022 only Samsung S22 series is able to upgrade to One UI 5.0 but many other Galaxy phone will get One UI 5.0 update through OTA later in this year.

Samsung One UI 5.0 skin brings many new cosmetic features to it. Security is also improved in One UI 5.0 as compared to One UI 4.1 as all third apps need to take permission to access anything in your Galaxy phone.

You can also grant permission to specific photos or videos to a third party apps and other files in your storage will keep remain inaccessible.

Here we have only discussed the major changes made in this upgrade so let us discuss all of them one by one.

Notification center is optimized and looking more clear in Samsung One UI 5.0 as compare to One UI 4.1.
Icons in the One UI 5.0. You can also see in images that icons at the left side of notifications are now much bigger in the notifications.

You can also notice that two buttons below at notification panel (Notification settings and Clear) are more clear now than previous version.

But there is no change in the notification center in Samsung One UI 5.0 and One UI 4.1.

Active apps feature in notification center menu option has been added in One UI 5.0 update. This feature can be useful to track the apps active in the background.

And you can stop unused active apps running in the background as it can clear more RAM and conserve battery of your Samsung device.

Samsung One UI 5 devices will also get security and privacy improvements provided in Android 13.

Google has improved privacy and security in Android 13 over Android 12. You can now specify permission for specific photos and videos to third party apps.

You need not to provide full media access to third party apps. Its really really a very good and useful improvement in Android 13.

Samsung has optimized the UI for the permissions and it look pretty good. Permission UI is green in color and three rectangular columns.

Security and privacy is one of the top feature from Samsung One UI 5.0 update new features.

Battery health option is a great feature in One UI 5.0 and it is in the beta one but this feature will be added in main feature in near future. Battery health in this One UI update is similar to how it is on iOS in iPhones.

New View details feature option added in battery learn usage. You can also find these details in One UI 4.1 but there was no dedicated button to open these learning usage pattern details.

But a dedicated option View details is added in One UI 5 upgrade.

Split screen is a feature in Android smartphones which we are seeing from a long time but this time it is optimized to next level with One UI 5.0 update in Galaxy devices.

However split screen was also available in One UI 4.1 but it was not that much handy.

You can now open split screen very quickly by swiping two fingers from bottom to upward in any app interface. And it will shift the already opened app in upper half of the screen and provide you app list to choose any one of these.

There is no option available in One UI 4.0 to add the watermark in photos. But you will now be able to add watermark including date and mobile name on all of your photos.

However this feature is optional, you can enable it from settings within the camera app in One UI 5.0 devices. Some users find this feature useful but I personally never add watermarks on my photos.

Widgets comparison One UI 4 vs One UI 5

Support to add widgets for all apps has been added. You can now find more widgets in One UI 5 as compare to One UI 4.1.

Apart from the more widgets support in One UI 5.0, Samsung has also included sliding widget feature. You can now switch to many other selected widgets by scrolling left-right on a widget.

This is a special type of widget area and you need to set it before you use it. It is different to normal widgets.

Example of YouTube app notification settings has been shown in the image given below.

Multiple Users support in One UI 5.0

Multiple user is similar feature which we generally find in Windows PCs. You will now be able to create many users in a single phone and no one user can see the data from the other user.

This feature can be useful if more than one people use a single phone at home or office and don’t want to show their data to each other.

You can also use two users in your phone to utilize one user for your personal purposes and other for professional purposes.

Copy text from image and videos is not available in One UI 4.1 and below but its added in One UI 5.0.

This is just a most awaited and useful feature in One UI 5.0 update. You can now copy text from any image very easily and it also work on videos also.

You can also copy text from videos, to do that it will first take screenshot of the video after that it scan for the text and now you can copy the required text from that screenshot.

You can also live scan text from any object by focusing galaxy phone camera and from there you can copy, edit and paste it at required place in any app.

You have now copied the text from image or part of the video and now you can use it anywhere from the clipboard, paste it at required place.

There are very minor changes in camera UI. Samsung has added new histogram option in camera UI. This feature can be find inside the Pro video mode.

In the about phone section under system settings in One UI 5.0 update you can see the image of the device with color variant information.

Ultra wide band on off

One UI 4.1 and below in Galaxy device doesn’t support ultra wide band feature but it has been added in One UI 5.0 update.

Samsung users can now turn ON or OFF Ultra wide band feature for network connection. This feature is helpful to conserve more battery for your smartphone.

Samsung has added a new haptic in One UI 5.0 update. When you exit an application you will see a new haptic animation which looks pretty cool.

For S Pen supported devices, Samsung has added a new shortcut for the magnification so you can access and use this feature even more easily.

You can turn on magnification by pressing and holding volume up and down keys simultaneously for three seconds.

Some new experimental features have been added in Samsung One UI 5.0 update. However Samsung labs is also available in the One UI 4.1 but you can find more experimental apps in this section in One UI newer version update.

You can also see in the image that two new experimental features are added within the Samsung labs.

One UI 5.0 Vs One UI 4.1 vibration intensity controls

Three vibration intensity controls are already available in One UI 4.1 support galaxy devices but one more volume control for media is added in One UI 5.0 update.

Samsung is bringing many new features, UI improvements and performance enhancement with its One UI 5.0 upgrade. Samsung One 5.0 UI is powered with latest version of Android by Google.

All the new features including security and privacy of Android 13 will be there in One UI 5.0.